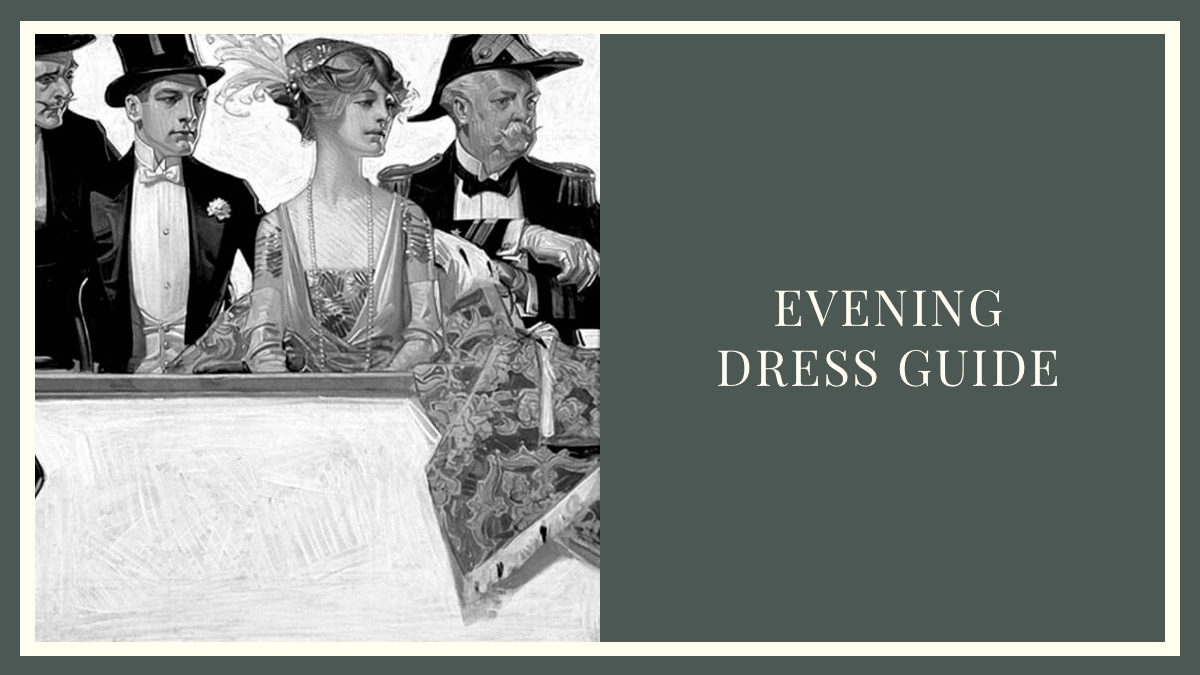 'The man who, as is often said, can get away with wearing a trench coat over his dinner jacket, or an old school tie for a belt, is the one who in fact understands best the rules of proper dress and can bend them to suit his own personality and requirements' - G. Bruce Boyer

Evening dress, or full dress, is the traditional dress code for events after 6 pm. There are some fixed rules to evening dress. Read on below to find out how to look your best: 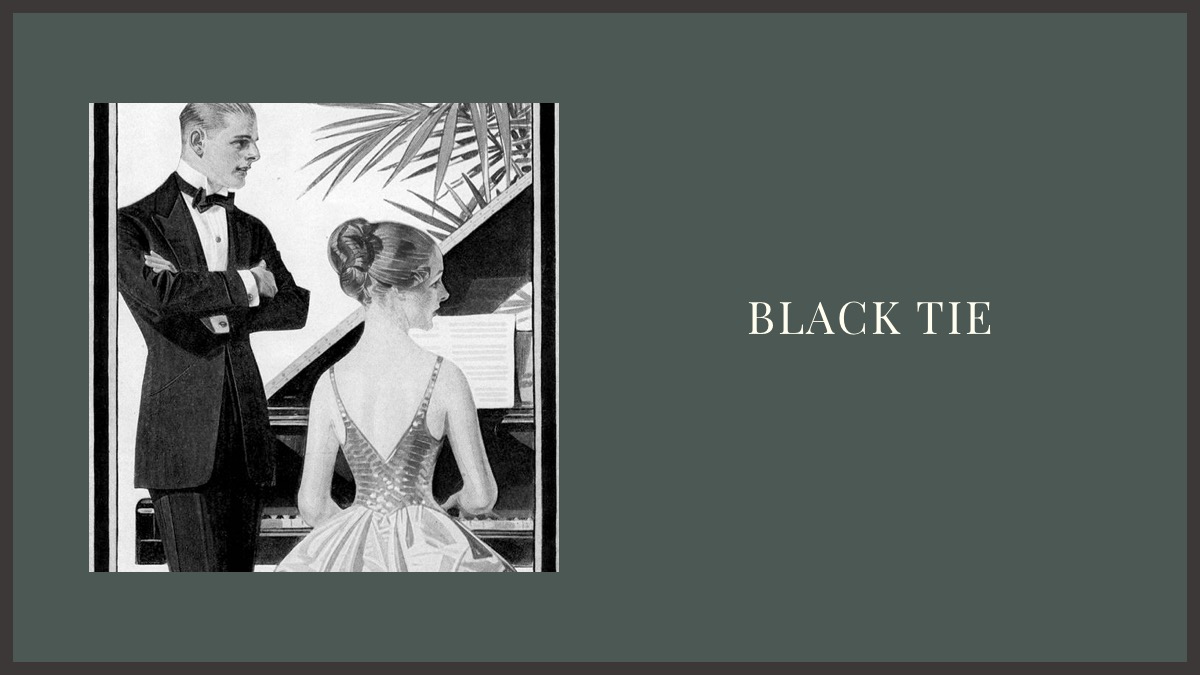 In 1865, the Prince of Wales, the future King Edward VII, placed an order with his tailores on Savile Row for a short evening jacket with matching trousers in a midnight blue cloth. Thus, the dinner suit was born.

This less formal version of evening dress became increasingly popular through the late nineteenth-century as an alternative to wearing a tailcoat.

During the early twentieth-century, the standard accompaniments to the dinner suit became a white shirt, black bowtie, and black waistcoat, forming what we now know as 'black tie' or a 'dinner suit'.

This mode of dress has varied with the fashions of the last century but largely remains unchanged, and we are proud to offer a wide-ranging selection of styles both traditional and modern. 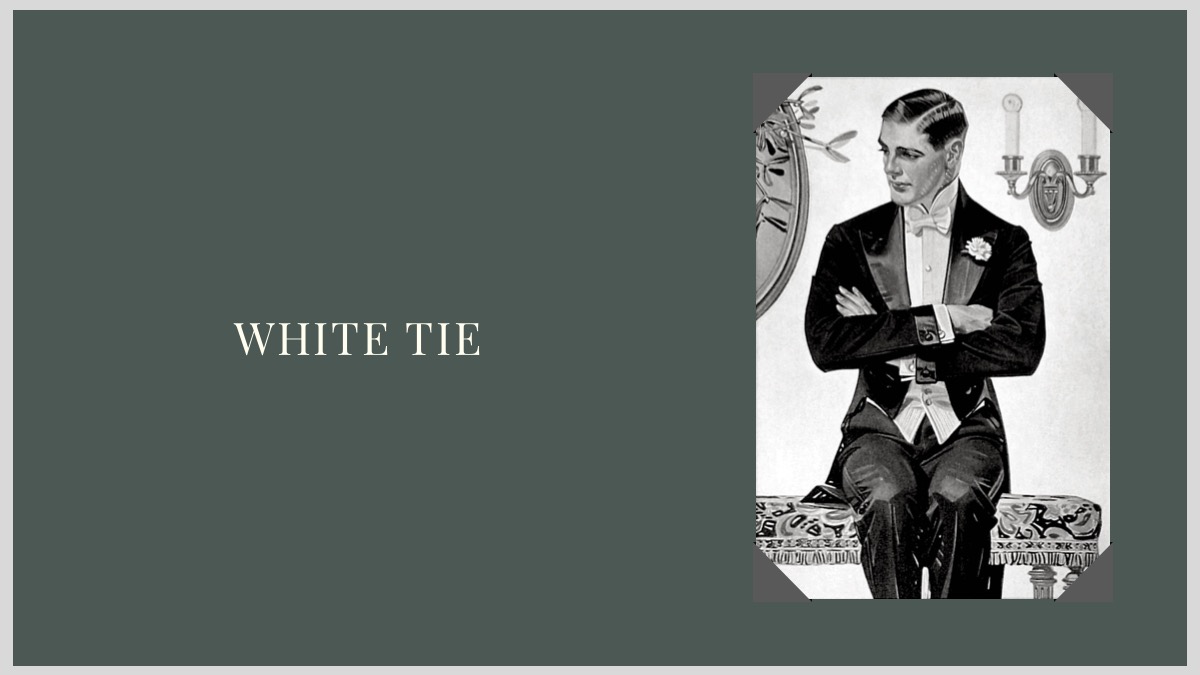 Through the end of the eighteenth-century and beginning of the nineteeth-century, the fashion for men began evolving away from the highly-decorated court dress of the baroque era. Trousers replaced breeches, well-fitted black or midnight blue coats replaced generously-cut and colourful, brocaded coats.

By the 1840s, a minimalist look of matching black barathea trousers and tailcoat with a white (or ivory) waistcoat, bowtie, and shirt was the de rigueur evening wear choice for discerning gentlemen.

Today, white tie, or full evening dress, remains the most formal mode of dress for evening wear. It is most often now reserved for official state functions, ceremonial occasions, and some formal balls. As such, the guidelines for white tie are much more restrictive than other forms of dress. 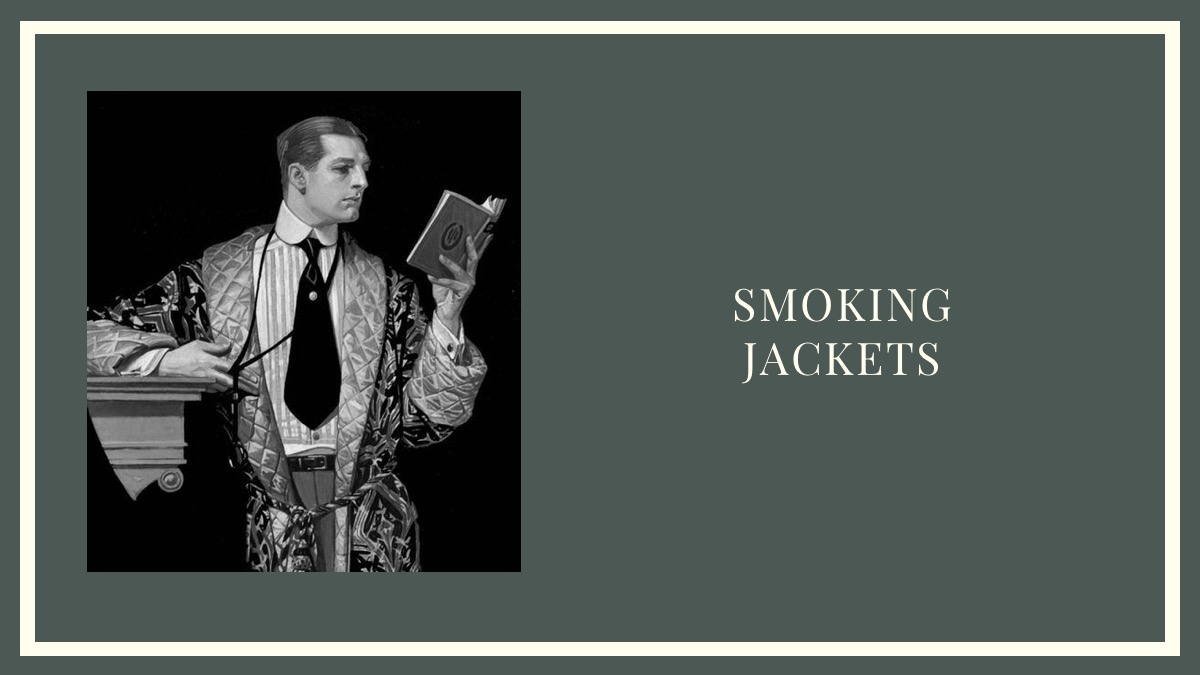 As goods from the Far East began to flow into Europe via the great seventeenth-century trade route known as the Silk Road, spices, tobacco, coffee, and silk became highly-coveted possessions of the wealthy and powerful. Long, silk damasque gowns (much like the one in the drawing above) were worn as an outward sign of one's status or, as recorded by Samuel Pepy's in his diary, when unaffordable, they were hired to give the illusion of status. By the nineteenth-century, these robes evolved into a short-fitting jacket, worn over evening clothes as a form of protection from the falling ash of a cigar, earning the name 'smoking jackets'. Reminiscent of the early-modern interest in all things from the Orient, our smoking jackets offer gentlemen an opportunity for a splash of colour and decadence in evening wear. We offer the largest selectino of ready-to-wear smoking jackets of any retailer in the world in a wide range of styles from an understated Eaton velvet jacket to our Caversham jackets with frogging (a form of braided decoration) and quilted lapels.